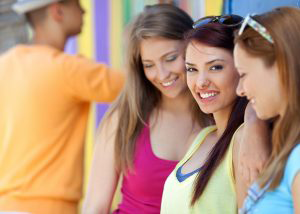 You might be more likely to have sex if:

Did you answer yes to any of those?

Have you thought about sexuality, and the advantages of delaying sexual intercourse instead of rushing into potentially adverse consequences? Physical intimacy between two loving adult partners is beautiful and joyful. It perils in comparison to a bad experience that may come too early. “When young people have sex before they’re ready, they usually end up regretting it. I’d hate to see that happen to you.”

Why wait? It’s the only foolproof way to avoid an unplanned pregnancy. If you don’t have sexual intercourse, a girl can’t get pregnant.

Why wait? Because later on, girls who had often wish that they hadn’t. Researchers in New Zealand interviewed nearly one thousand young people, all in their mid-twenties, about their first sexual experiences. On average, the men had become sexually active when they were seventeen; the women, at age sixteen. Looking back, more than half the women admitted that they now wished they’d held onto their virginity longer, a sentiment seconded by 70 percent of the women who had been fifteen or younger the first time they had intercourse.

“The pressure on teenagers to have sex is enormous,” says Denver pediatrician Dr. Ron Eagar, adding that kids often feel as if they’re caught in a vise. Not only do they have to contend with the direct pressure to “do it” from their date or steady boyfriend/girlfriend, there’s the peer pressure applied by friends who want to know (elbow jab, wink wink) “didja do it?” They may also feel the internal pressure to keep pace with their friends, as if competing in a marathon to lose their virginity. One way of helping you resist these pressures is to anticipate them and practice what you might do/say.

An example of this is to picture yourself in a given situation and imagine how you might react, as if watching yourself in a movie frame by frame. For example: “If I was invited to a boy’s house and discovered after I got there that his parents were out of town, what would I do?” Athletes and performers often use visualization to help them prepare for upcoming challenges, including those they’re encountering for the first time.

Try to think ahead, anticipate potential trouble and be alert to warning signs. Perhaps the girl in our example could have asked if his parents were going to be there prior to going. After she discovered his parents were not there and that he had lied to her, she should have registered this as a warning that trouble might lie ahead. Then she could have decided to ask to be taken home, thus avoiding the awkward situation.

Giving You the Words for Fending Off Unwanted Sexual Advances