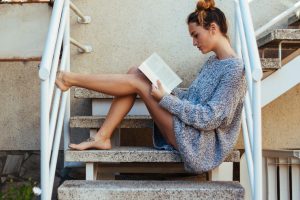 This is a true story about Jacquie. She, like many others want to share their story in an effort to encourage other women.  Below she shares from her heart about her abortion experience and the events that followed.

When I found out I was pregnant I was scared, but I was elated. I thought that my boyfriend would be happy, and that we would become a happily ever after family. But I was very, very wrong. When I told him, he said that he would support whatever I chose, but he kept pushing for abortion. I was terrified of losing him, and I didn’t want my child to be raised the way I was, without a father.
I had never given much thought to the topic of abortion in my past. I didn’t see anything wrong with it, but I always thought it wasn’t for me. The more he suggested it, the more I wrestled with whether or not I was okay with it for me. But if it was legal and our government said it was okay, I figured it couldn’t be that bad. Abortion was a way of making sure that I didn’t have to give up on my own dreams. After many weeks of coercion, I agreed to “take care of the problem.”  He never seemed to give any thought, and nor did I, to how going through with this would change our lives forever.

I sat in front of my computer, very hesitant. I didn’t know how hard it would be just to type the words “abortion clinic” into the Google search bar. I was greeted on the other end of the phone by a young woman with a chipper voice asking, “How may I help you?” I stumbled through my words and I struggled to get them out, “I-I-I-I n-n-n-need to have and a-a-a-bortion.” She responded in that same chipper voice, “Okay, no problem. We can help you with that problem.” She then proceeded to tell me what I needed to do, how much it would cost, and how I was doing the best thing for my future. She set up my appointments and told me not to worry. She told me that everything would be back to normal once it was taken care of.

The clinic required a “pre-op” appointment. I went to that first appointment by myself. That appointment was overwhelming. I heard all the scientific facts of the thing growing inside of me and how this was the best thing I could do for my future. But no one ever spoke of the growing mass in my belly as a baby. No one told me that my baby had a heartbeat. No one told me that my baby could feel pain. No one told me that my baby was a baby. These are things that I wouldn’t learn until after it was over; after I couldn’t change my mind. They tried to prepare me for what my body would experience as a result of the procedure. They explained that there would be some pain involved but that after a few days I should feel pretty normal again. They explained to me that I may experience a little sadness, but that would simply be the result of my hormones getting back to normal. By the time I left that appointment, they had convinced me that I was doing the right thing. The doctor and nurses promised me freedom and happiness once they had “fixed” the mistake that I had made.

I had to wait three days before I went back to the clinic for “the procedure” as they called it. But those few days felt like an eternity. I felt like an inmate on death row who was waiting for her sentence. Those days dragged on in a haze of confusion and alcohol abuse.

It’s funny, really, the lies you believe when you have no foundation of truth…

The night before the “procedure” my boyfriend promised he would be with me, he promised that he would support me through the whole experience because, as he said, we were doing the right thing. But that night, I experienced the first in a long string of broken promises. He didn’t show up, and I was left to wrestle with my confusing emotions on my own.  When he arrived at my house the following morning to take me to the clinic I was filled with anxiety. I had placed my physical, emotional, and spiritual well-being into the hands of the man that I thought loved and would only do what was best for me, not knowing at the time that my safety and security were the last things on his mind. He told me we were doing the right thing, and I believed him. But if this was right, then why did I feel so wrong? If this was right, why did I feel so condemned? If this was right, how come I felt so ashamed? If this was right, how come I felt like, from that moment on, I needed to guard this secret with my life?

Entering the clinic was overwhelming. I was consumed with confusion as I was greeted by smiling faces. How could they be smiling about something that felt so wrong? We had a seat in the waiting room and it felt surreal. My name was called, and walked through the doors that I would never walk back out of. I was asked to change my clothes and have a seat in another waiting room. This room was full of terrified girls and young women. We were all waiting to hear our names called so we could get this over with. The room smelled of shame. At the time, I assumed we were all just ashamed of our pregnancies. A few of the ladies tried to make small talk, but mostly we all just kept to ourselves, trying to hide our faces.

One by one, our names were called. Finally, it was my turn. Finally, I would be getting that freedom that I was promised.

I followed a nurse back to the “exam room”. I think death chamber is a more appropriate name. I’ll never forget this doctor as long as I live. His eyes were like ice that chilled me to my bones. For the first time in my life, I felt like I was in the presence of evil and my consciousness seemed to shut down.  I had made myself become numb; I felt like a zombie. The doctor and nurses spoke to me and my body responded to them, but I couldn’t comprehend what was going on. I followed orders and laid down on the table. I watched as the doctor pulled the stirrups out, placed my feet in them, and strapped my feet down. One nurse injected a medication into my arm that would sedate me and I felt a cold sting run through my veins. The medical team was busy with mindless chatter as I lay there helpless and afraid. It was as if what they were about to do to me meant absolutely nothing to them. One of the nurses urged me to close my eyes and promised I would be asleep before anything started. That’s when I felt the doctor touching me and I felt a warm tear streak across my cheek. The doctor said, “This will be cold,” as he pushed the frozen ultrasound probe inside of me. My mind was starting to feel cloudy, and I was beginning to lose consciousness… that’s when I heard the doctor’s voice again. “Wow, that’s a strong heartbeat. Oh, no wonder, there’s two.” It was in that moment that I changed my mind. I tried to speak and struggle free. My mind was screaming, “Let me go, let me go,” but the drugs they had given me had done their job; I was too weak and disoriented and my eyes closed. The last thing I heard was the distinct sound of two very strong, very healthy heartbeats.

The next thing I knew, I was waking up to extreme pain. I tried to scream, but nothing would come out. Then I felt that cold sting in my arm once more and I was again unconscious. The next time I awoke, I was being forced from the exam table to a wheel chair. One of the nurses pulled on my arm and almost yelled for me to “wake up and move.” I groggily followed orders, still unable to comprehend what was happening. Was it over? Was I fixed? Was I free? As I stood up, I was overcome with pain and I nearly collapsed into the waiting wheel chair.

No one had prepared me for the amount of physical pain I would be in. I got dressed and was only able to half listen to the instructions the nurse was giving me. The nurse then walked me to the back door and led me out of the building where I found my boyfriend waiting to take me home. At the time, I wondered why we weren’t allowed to leave out the front door after the procedure, now I realize that they don’t want the young women in the waiting room to see the pain and despair on our faces – that might lead them to change their minds. That’s why they made us use the back door.

The weekend was a blur of pain, sleep, and crying. I hated sleeping because I was overcome with grief in every nightmare. Being awake and facing the physical pain was better though than being asleep and experiencing the taunting nightmares. Honestly, at the time, I didn’t think I would survive. I truly believed that this pain would literally kill me. And a part of me hoped it would. The promises were all broken. My boyfriend’s support quickly dwindled as did my trust and faith in him. I had placed my body in his hands and allowed him to control me and he shattered every fiber of my being. I was determined to never be that vulnerable again. I was determined that no one would ever have that kind of control over my life again.

This story took place just over six years ago – January 11, 2008. In these past six years I have hidden and run from much of the pain I have felt. In 2012, the weight of the abortion hit me like a hammer and sent me into a self-harm relapse. Because my closest and most trusted friend had previously volunteered at a Pregnancy Center, I reached out to her. With her support, I called and made an appointment for post-abortion counseling. I was met with love and acceptance and for the first time in nearly 5 years, I let myself grieve and cry. I attended a study with other women. Everyone treated me with more love and compassion than I thought was possible. The shame of abortions is real and it is deep. Most women hide it so deep that they don’t even realize how much they’re still hurting. It’s odd really, when women choose abortion they choose it because they don’t believe that they have any other option. We’re promised freedom, but what we find is the furthest thing from it.

If you find yourself relating to any part of this story, remember that you don’t have to go through this alone. Whether you just took a positive test or have already experienced abortion, Options for Women can help. Please call 573-883-1088.