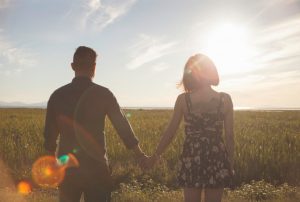 There’s a big difference between being wanted and being respected. Sometimes I think we get way too caught up in the moment of being wanted and desired that we forget to respect ourselves. We allow ourselves to be mistreated in the heat of the moment because it’s just so nice to have some attention from time to time.

Attention is nice, it feels good, and it makes us feel special. It’s instant gratification. We like it when a guy comes up and flirts with us, we like being hit on at bars in a non-creepy way because it makes us feel good about ourselves. It’s why we like swiping on Tinder so much because being wanted and sought after feels good.

It’s a confidence booster when you’re feeling low and it makes us feel good about ourselves.

But that’s the difference between being wanted and being respected.

Being respected is more difficult; it takes longer to respect a person. It takes time to learn their values and to understand why someone believes the things they do. It takes in depth conversation and to respect someone you must care about them on some level.

Being wanted and being respected are two completely different things, but you should always desire to be respected over being wanted.

You might like the instant gratification of being wanted, but it shouldn’t mean a thing if he doesn’t respect you.

Don’t be with someone because they’ve got a smooth voice and can string together pretty words that make you feel good for a second if they’re going to turn right around to their friend and trash talk you.

Don’t fall into the arms of someone who doesn’t respect you and cares more about sleeping with you than how he’s going to make you feel when he doesn’t call you back.

Don’t stand for that.

Don’t let him take the best of you and leave you feeling used because when he doesn’t respect you it’s going to leave you feeling hurt. It’s going to leave you questioning what went wrong, but the truth is he never intentioned on staying, not even a little bit. It’s easy to walk away when you don’t respect someone unfortunately. It’s easy to just forget about them when you don’t know or appreciate their values.

You must treat yourself with respect in order to gain other’s respect.

A guy can like you, but his words shouldn’t mean anything until he respects you because by allowing someone into your life who doesn’t respect you ultimately shows that you don’t respect yourself. You should never let someone walk all over you, use you or make you feel like you’re just a side piece because that shows lack of respect towards yourself and he’ll know he can just continue to put you in those horrible situations and leave you hanging. He knows he can do it time and time again.

If someone doesn’t respect you kick his butt to the curb because the attention isn’t worth the self-torture you’re going to put yourself through.