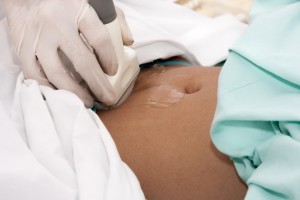 A general ultrasound is a noninvasive medical procedure. Ultrasound machines are unlike x-rays. No radiation is involved in an ultrasound so they are not harmful to people.

How does an ultrasound machine work?
Ultrasound imaging uses sounds waves to view the inside of the body. Ultrasounds are also referred to as ultrasound scanning and sonography. Ultrasounds are based on the same principles of sonar that bats use. The transducer (probe) and gel are placed on the person’s skin in the area needed to be viewed. Inaudible, high-frequency sound waves are sent from the transducer through the gel and into a person’s body. The transducer then collects the sound waves that bounce back and the computer creates an image from those waves. Ultrasound images are done in real time which allows for the viewing of organ structure and movement and blood flow.

Ultrasounds have traditionally been solid flat images. With advancing technology some machines are capable of 3-D images.

Why are ultrasounds preformed?
Doctors use sound wave images for many reasons. Some of those reasons include examining of internal organs (heart, liver, bladder, uterus, etc.), biopsy procedures, fetus viability, and diagnoses.

Why is ultrasound used during pregnancy?
Ultrasound allows for the confirmation of a viable pregnancy. A viable pregnancy means that there is a fetal heartbeat and the fetus is alive. At Options for Women we perform limited ultrasounds during the first trimester for the purpose of checking for viable pregnancy, confirming pregnancy in uterus, and gestational age. A first trimester ultrasound at a physician’s office can also be performed to identify potential problems of the placenta, uterus, cervix, and ovaries, checking of multiple pregnancy (twins), and miscarriage. During the second and third trimester, the ultrasound can be used to determine baby’s age, growth, position, and gender, identify developmental problems, and look at the placenta and amniotic fluid.

Preparation for an ultrasound
Little needs to be done before the test. Wearing loser clothing is helpful. A full bladder allows for easier viewing of the uterus. So drinking before hand is a good idea.

What will I experience?
Ultrasounds are painless and tolerable by most patients. Pressure is often applied to the area being viewed. Also, in some cases the transducer is inserted into the body which may cause a level of discomfort.
The procedure usually only takes approximately 30 minutes.

If you are pregnant and would like to set up an appointment for an ultrasound please call us at 573-883-1088. We are here to help.